Through the many twists and turns, we watched as the battle for the throne stretched across seven kingdoms and north of the Wall. At times Game of Thrones was emotionally draining or even frustrating, but the show took us around the world to many stunning locations. Read our list of 23 real-life Game of Thrones locations to visit, and what some of our past interns have said about seeing their favorite filming locations.

Fans will remember the rocky shores of Itzurun Beach most recently when Daenerys Targaryen made her return to Westeros. Unlike some other Game of Thrones locations, Dragonstone is incredibly easy to visit. The beach is located next to the seaside town of Zumaia. You can hike along the Flysch Route coastal walk or even hire a guide to show you around. 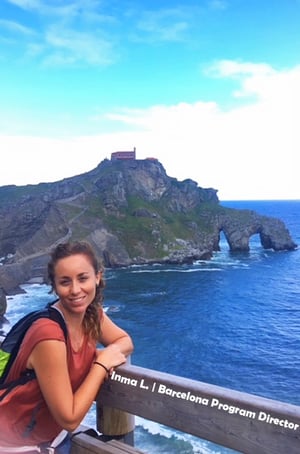 If you want to go to the footbridge that Daenerys and Jon walk along, go slightly west towards the town of Bilbao. Bilbao might not have the same amount of tourist as some other locations, but the city still has plenty of charm.

"Year after year, interns on my [Barcelona] program finally convinced me to watch GoT, and it was life-changing! I actually visited San Juan's place before even watching the series. By coincidence, someone told us to visit it while we were there in Euskadi. It was absolutely breathtaking. They digitized the little chapel and inserted a castle instead for the show. Pro tip: Make sure to book online before you visit. I promise that the view is worth it!"
- Inma L., Barcelona Program Director 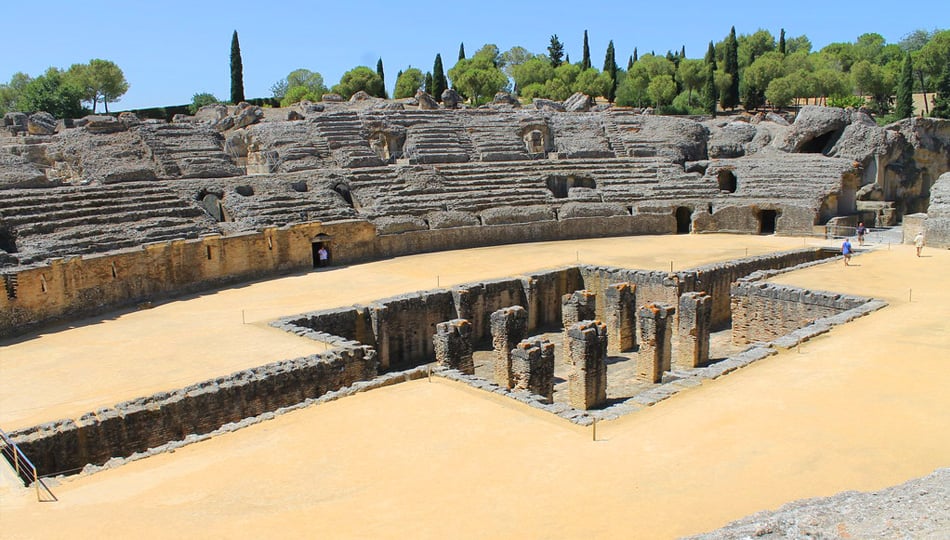 The Roman ruins of Itálica will be best known to fans as the largest gathering of Game of Thrones characters in the show’s history. The ruins once hosted 25,000 spectators but are now known for hosting friends, foes, Taragaryens, Lannisters, Greyjoys, a wight, and more.

The first-time Daenerys releases her dragons on the Lannister army is an unforgettable scene in season seven. The ensuing battle and loot train attack all took place at Los Barruecos in Northern Spain. You can explore the sprawling nature reserve and see where one of Game of Thrones’ most fiery battle scenes was filmed.

When traveling in Spain the city of Girona is a must-visit for any Game of Thrones fan. The medieval city provides plenty of incredible history and has been used for multiple Game of Thrones sets. By walking through the ancient streets you’ll be transported to parts of Braavos, Old Town, and Kings Landing.

The home of House Tyrell, Highgarden, that was seized by Jaime Lannister in season seven is actually Castillo de Almodóvar del Río. The castle dates back to the 8th century and sits in the hidden gem of Córdoba. Highgarden is open to visitors to explore the dungeons, towers, and range of weapons. 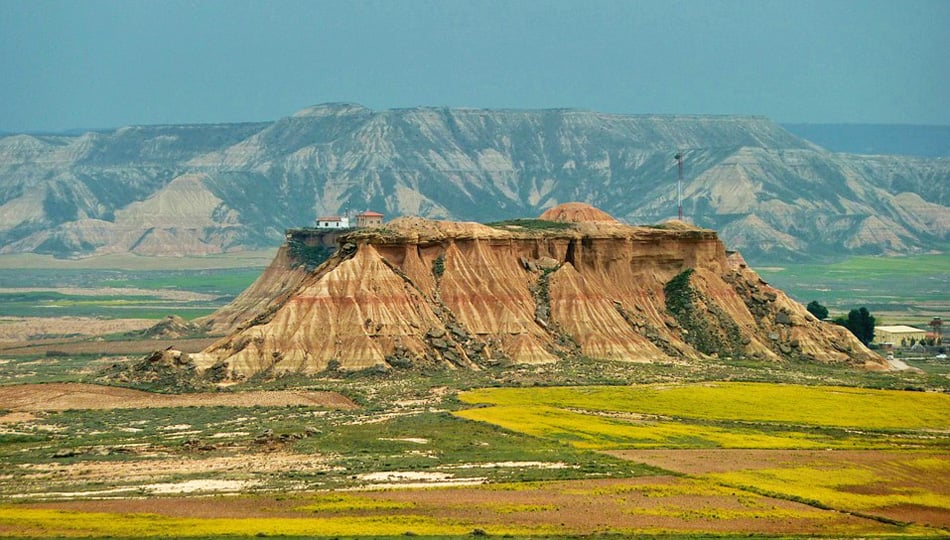 The desert landscape of Bardenas Reales isn’t what you would expect to find in most parts of Europe. However, the miles of carved stone and seas of green grass made it the perfect place for the Dothraki Sea in season six. Visiting the area can be a bit difficult, but if you’re willing to make the trip, you’ll be treated to once in a lifetime views. 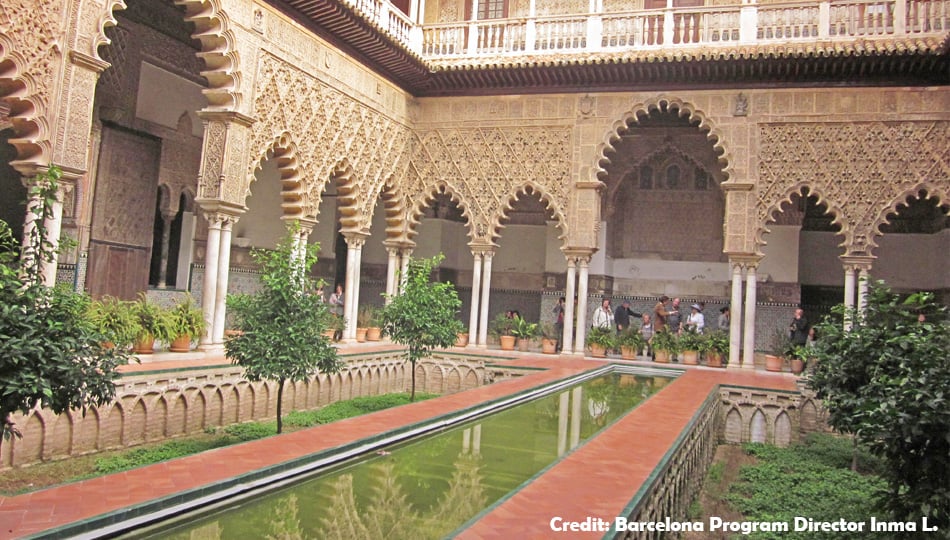 The royal palace is the oldest royal palace still in use in Europe, but the crew of Game of Thrones was able to shut down half of it to film some of the series’ most famous scenes. The royal palace served as the setting of the Water Gardens in the fictional city of Sunspear. The site is a registered UNESCO World Heritage site and has grown into Seville’s biggest tourist attraction.

Daznak’s Pit is a massive coliseum that once housed gladiator battles. Now the arena is used by the Mother of Dragons to make her daring escape on the backs of her dragons from the Sons of Harpy. You can take a tour of the season five scene and find plenty of incredible history in the town of Osuna. 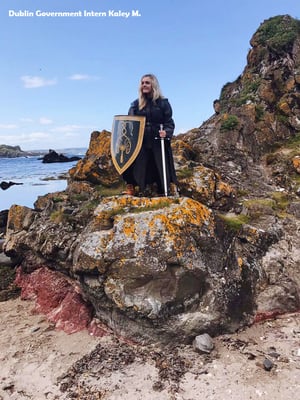 Since the Iron Islands were first introduced, Ballintoy Harbor has been featured throughout Game of Thrones. Some of the most notable scenes include Theon’s return and when he met his sister Yara for the first time. The Iron Islands is a must-see for both the casual and hardcore Game of Thrones fans.

“The tour that I was a part of brought pictures and a tablet to show the actual scenes while we were in the shooting locations, which made the locations even more enjoyable. It helped to bring Westeros into the real world and to Northern Ireland. It was also breathtaking to think that these locations exist in the real world and weren't just created digitally to be used on a green screen during production.”
- Rebecca S., Dublin, Salisbury University

An active quarry until 1980, Magheramorne Quarry is better known as one of the most important places in Game of Thrones history. Not only is it the backdrop of Castle Black, but its also where many of the sets are built. Thanks to Arya’s epic defeat of the Night King, you won’t have to worry about White Walkers on a tour of Castle Black.

The trees were originally intended to leave visitors in awe as they approached the Stuart family’s Georgian mansion. Hundreds of years later, the trees are some of the most visited in the world and one of the most popular Game of Thrones sites. In season two episode one, Arya Stark escapes King’s Landing dressed as a boy along King’s Road.

“I am a big GoT fan so it was really cool getting to see where they filmed the King’s Road. I felt like I was in Westeros traveling with the characters to King’s Landing! It’s also just a really beautiful place that should be visited regardless of whether or not you’re a GoT fan! Tip: if you go with a tour group try to walk ahead of the crowd so you can get a shot with no people in it.” -Paige M., Dublin, James Madison University

Castle Ward isn’t just a set to visit; it’s an experience to be had. At Winterfell, you can see multiple filming locations, meet the direwolves from the show, and live out life in the castle. Winterfell is an easy trip to make as the castle is only two hours away from Dublin and two and a half hours away from London.

Tollymore Forest Park has played a significant role in Game of Thrones across multiple seasons. Ned Stark finding a dead stag, watchmen encountering White Walkers, and Theon trying to escape Ramsey were all shot in the Tollymore Forest Park. The park is one of the most popular places to hike through in all of Northern Ireland. 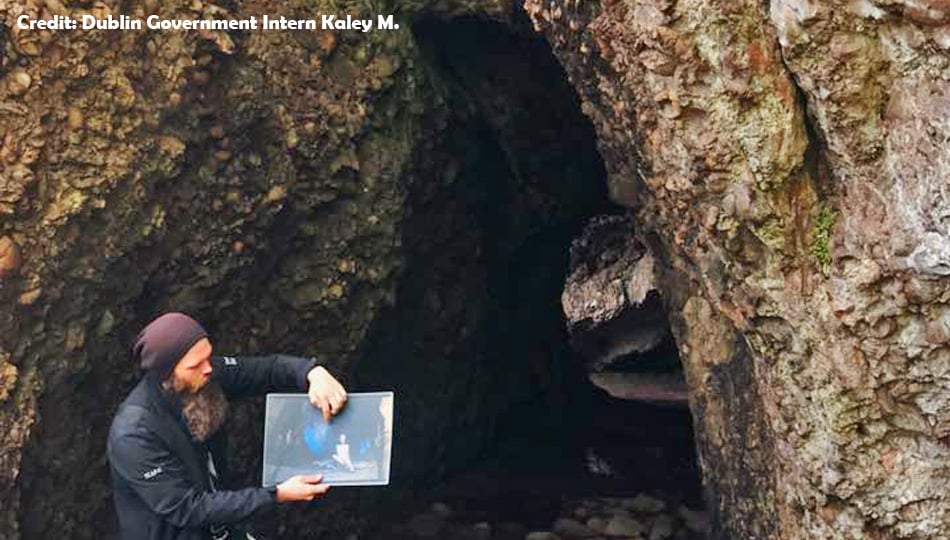 In season two, the Cushendun Caves were the setting to the shocking scene of Melisandre giving birth to a shadow baby. The crew returned to the chambers below Storm’s End to shoot more in season eight. The caves are one of the most popular and easiest sets to visit.

The formation of the Stakkholtsgjá canyon causes it to be eerily quiet, making it the perfect place for Jon’s ambush of wights in season seven. The canyon is stunningly beautiful as it’s over 330 feet deep and ends in a waterfall. 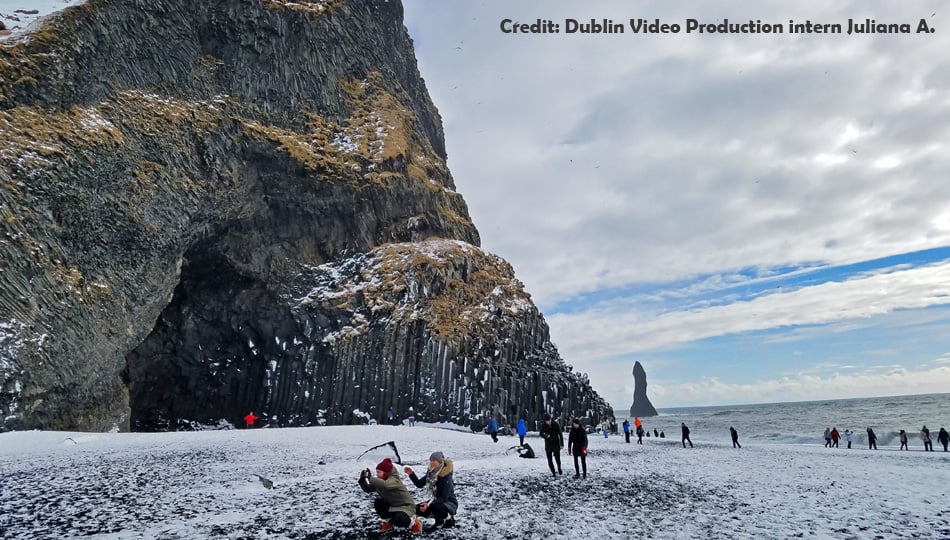 The black-sand beach in Vík, Iceland, looks straight out of a fantasy novel. Reynisfjara beach is where the Night’s Watch guard the Wall. There are plenty of ways to explore the stunning beach, including the South Coast Tour and ATV tour.

“Tips for GoT fans visiting would be renting a car, bring rain gear, and make sure to stop and explore as much as you can on your way to Vik. The restaurant attached to the gas station at the beach is also a must.”
- Margaret B., Florence, Marymount University 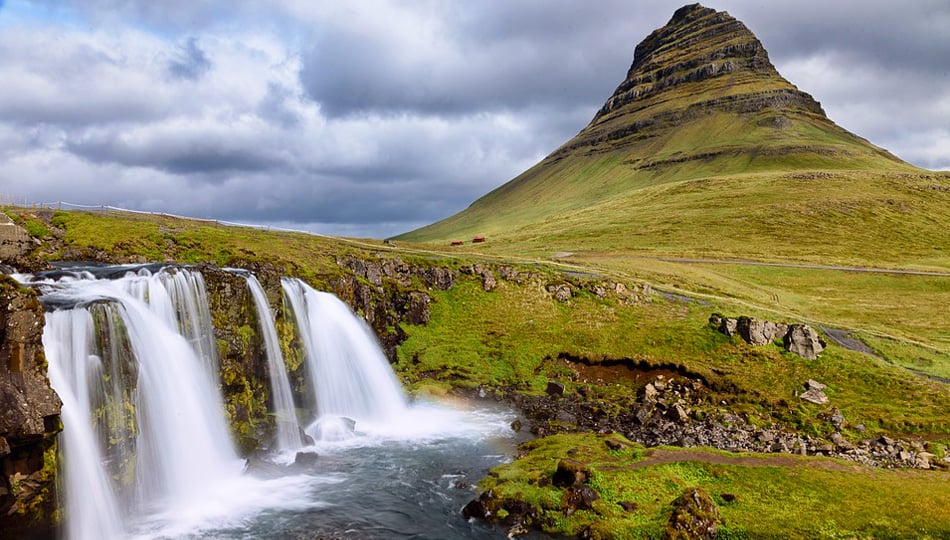 When Jon Snow and company head north of the Wall in season seven to travel to Arrowhead Mountain they were really headed towards Kirkjufell. The mountain is one of the most photographed in all of Iceland and not far from the town of Grundarfjörður. In season six the mountain can be seen when the children of the forest created the first White Walker.

18. Vatnajökull (Beyond the Wall) 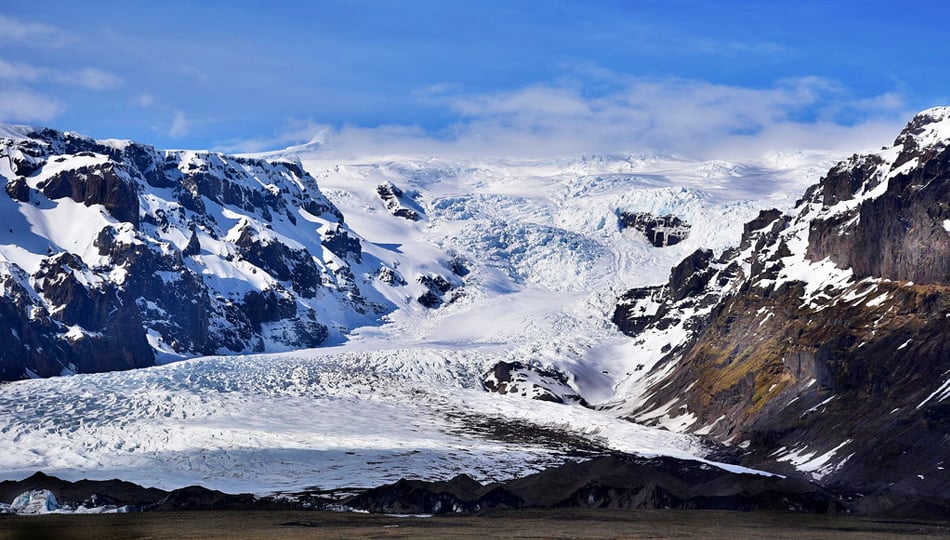 Vatnajökull is one of the most unique filming locations in all of Game of Thrones. Scenes north of the Wall were shot on top of one of the largest glaciers in Europe. Underneath the ice, there are volcanic lakes and volcanoes. Several types of tours take you around and under the glacier.

"I am now a die-hard GoT fan and when I saw the Dark Hedges and parts of Iceland in an episode I totally understood what they hype was about. It's such a cool feeling to stare at the masterpiece that is GoT and go ‘I’ve been there!', it just adds a small personal touch to something that is as huge as Game of Thrones."
- Juliana A., Dublin, Salisbury University

First appearing in season five, Šibenik was used to represent the city of Braavos. St. James Cathedral, a UNESCO World Heritage site, was used as the Iron Bank. You might recognize Braavos as the city Arya abandoned a mission from the Faceless Men.

Overlooking the Adriatic Sea, the Trsteno Arboretum made frequent appearances in early seasons of Game of Thrones. The Arboretum served as the King’s Landing gardens through seasons three and four. The gardens are where Sansa meets with her grandmother to discuss if King Joffrey would be a good husband. 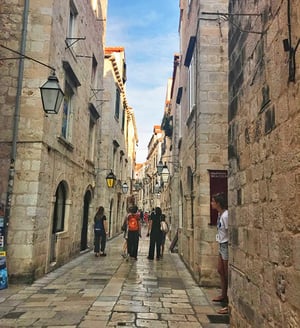 No special effects were needed to turn old town Dubrovnik into King’s Landing. By simply strolling through the streets, you will feel like you’ve teleported straight to King’s Landing in real life.

“It was one of the most memorable experiences I could have. I’ll never forget sitting on the iron throne and walking the same streets Cersei walked for her walk of shame. This place comes alive every turn you take you feel like you’re in King’s Landing.”
– Asha M., Barcelona, Salisbury University 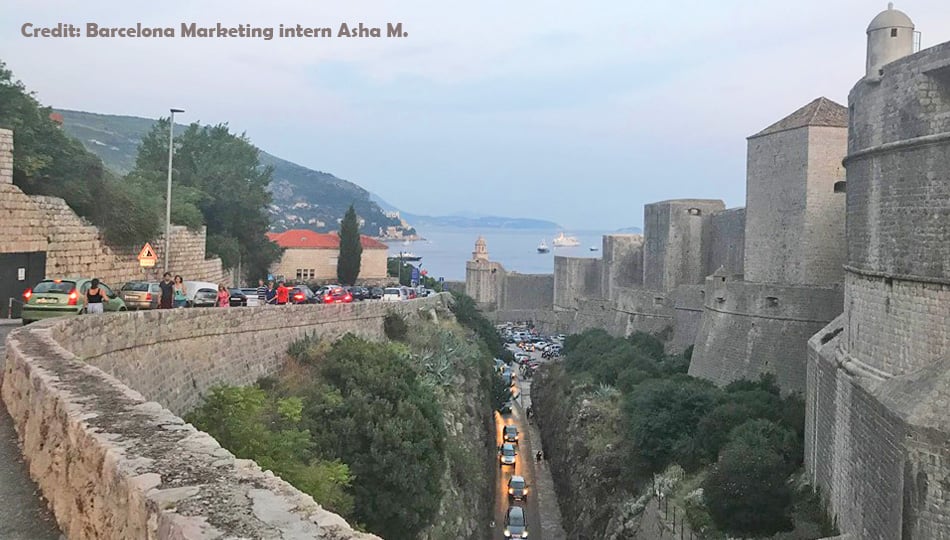 For centuries, the Walls of Dubrovnik were considered the greatest fortification systems in the world. That’s why it made the perfect setting for the King’s Landing walls in season two. Even though the walls were heavily edited with CGI, you will still feel immersed in the show by taking a tour of the medieval marvel.

Ait Ben Haddou has been featured in a long list of blockbuster hits and TV shows including Game of Thrones. The city made of clay is used to represent the slave-trading city of Yunkai. Ait Ben Haddou also holds the record for one of Game of Thrones’ most Instagrammed locations. 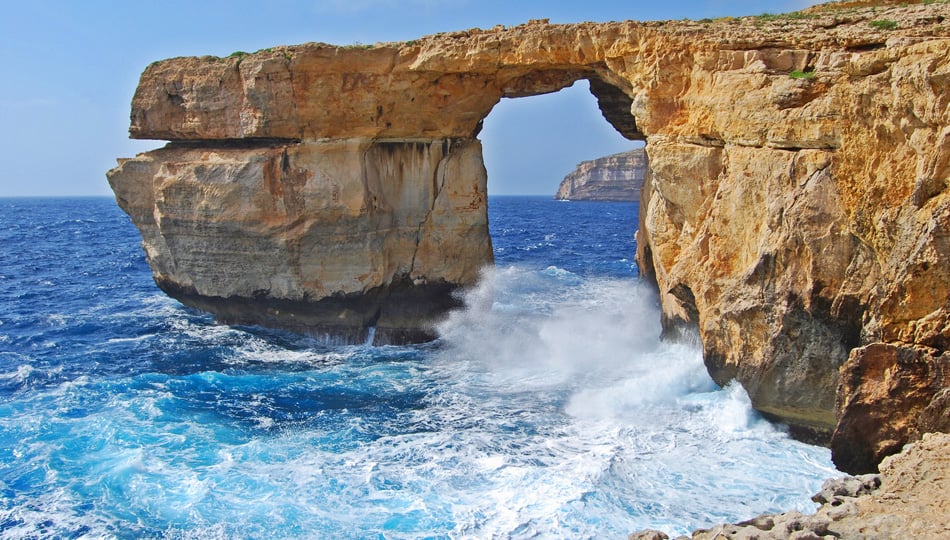 The Azure Window was the setting for the wedding feast for Daenerys Targaryen and Khal Drogo. The Azure window was one of the most popular locations to visit. However, after years of heavy storms, the rock formation collapsed into the sea.

Now that your watch has ended, it is time to start planning your adventure across Westeros and beyond the Wall. Let Global Experiences help you find the perfect international internship close to many of the Game of Thrones filming locations. Apply today and a member of our team will be in touch as soon as possible.