The Life of a Culinary Intern in Florence

Sarah is a culinary intern currently living and working in Florence, Italy. Below is a post titled "Workin' Hard, Drinking Coffee" from her Tumblr page about her first day at her internship. Sarah and the other Global Experience interns have been taking Italian language courses for the first four weeks of the program and will interning for the next six weeks. For more stories (and recipes!) from Sarah check out her blog.
"I’m slated to work dinner shifts for the next six days (!!!!!!), meaning that I theoretically have a bunch of time to do things in the morning, but this is only assuming I don’t sleep late. Which unfortunately I can’t seem to train my body not to do when I don’t have an important appointment to keep.

I’ve been meaning to check out the coffee shop scene here, because although it is not as big of a thing to frequent them and hang out there as it is in the States, Florence has a number of bookshop/library/cafe/weplaymusicatnight kinds of spots. Naturally I’m intrigued, as I like books, music, and coffee. So before embarking on my kitchen journey, I went to visit Le Cita’, a sweet little shop right over the bridge. I didn’t bother to check upstairs, where I later discovered there are couches and other more comfortable seating, but I spent a few really lovely hours reading and sipping coffee and being surrounded by a public whose interests were the same.

Off to work I go! Everyone working in the kitchen is super nice, really friendly, and efficient, clean, and know wildly more Italian than I do. However, none of them speak much English, so I just keep my mouth shut, listen, and respond/ask for more work/questions when necessary. To inaugurate my time there, I was handed a huge bag of beef, and chopped that for about a million hours. MMMMmmm yum. Raw meat smells really good, especially on your hands later. I prepped a whole bunch of other things, then all the employees (the chef, two other women who work in the kitchen, the dishwasher/helps everyone man, and two waitresses) ate dinner together, which was really nice. And though we don’t eat the food on the menu, that don’t mean it ain’t good. Cuz it is. Though I will be having a hard time eating pasta or bread every night.

The dinner service itself was kind of boring for me since as a someone who is completely uneducated-in-the-ways-of-their-kitchen I couldn’t be of much help. Good to watch what everyone else was doing, though. And by the end I was helping with appetizers and desserts and plating and carrying and things. 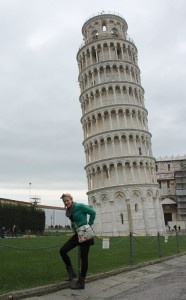 I had been told that I would get off work around ten or ten thirty when working dinner, but discovered that the norm is more like 11:30. This is partly due to cleaning, partly to people who wait for a million hours to order their desserts, and partly a result of how long it takes to organize and vacuum seal everything at the end of the night. I had the extreme pleasure of handling that (not so tedious).  And I only got to leave then because they let me go before everyone else (who are getting paid, so I don’t really feel too bad). By the time I got home I was super pooped, particularly my feet, as standing for eight hours kinda wears those puppies out, but didn’t feel like my day was over yet. Frustrating. I don’t want to become a lonely nocturnal lady who stays at home and knits herself into a bed coma when she’s not at work because everyone else is sleeping because it’s now three a.m. and her brain is still running because she hasn’t really used it yet today because chopping things doesn’t require thinking and it also doesn’t require moving much but now it’s too late to see her friends and there are people out but if she goes out now she won’t come home until five a.m. and then she’ll sleep all day before she has to go to work again and then she’ll be all wrong in the schedule of life and time and confused. So what’s a girl to do?"

If you would like to spend your summer or semester in Florence like Sarah inquire on our website and get started on your own internship abroad!