Christmas Around the World: How 9 Countries Celebrate

It’s that magical time of year when streets come to life with bright lights and people are full of joy.

Around the world, holiday celebrations are in full-swing with each country celebrating in its own unique way.

Check out some of the wonderful ways our host cities celebrate the most wonderful time of the year. 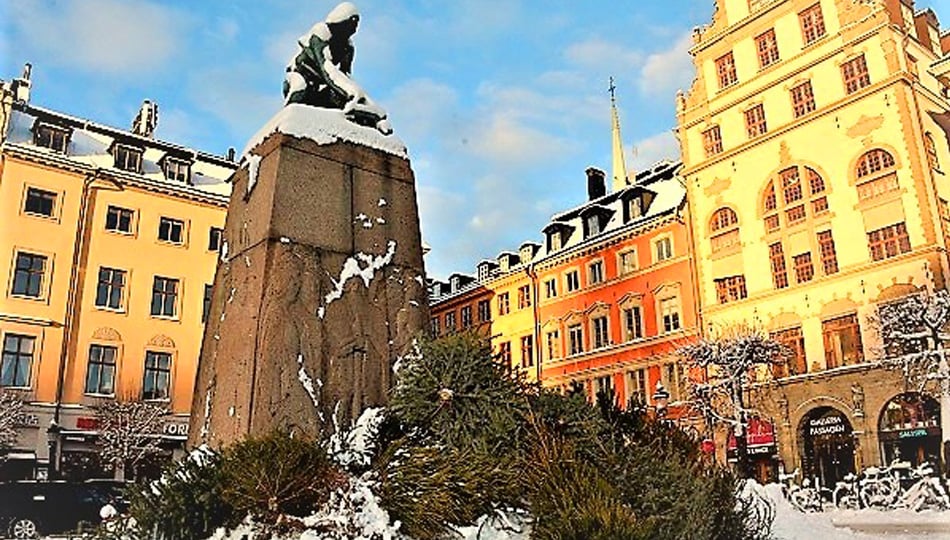 December is a busy and festive month for the Swedes. Technically the Christmas celebrations start December 1st when families break out the traditional Swedish advent calendars, but they don’t kick into high gear until after St. Luca’s Day on the 13th. St Luca’s Day happens to be the shortest day of the year and is celebrated by a handful of countries around the world.

Swedes love Christmas so much they can’t wait the extra day, and the large celebrations happen on the 24th. On Christmas Eve, families gather around the Julbord (Yule/Christmas table) which includes bread dipped in ham broth, different kinds of fish, meatballs, cheeses, potatoes, nearly every other traditional Swedish food, and rice porridge for dessert. Gifts are also handed out on the 24th, but instead of Santa Claus sliding down the chimney, Jultomten shows up at the front door. Julomten is a small gnome-like creature that has roots in Nordic folklore.

Swedes keep the celebration going until St. Knut’s Day on January 13th. Parties are thrown and ornaments are taken down during Julgransplundring, which literally means Christmas tree plundering. Once the tree is stripped bare its either thrown out or put in storage, officially ending the Christmas season in Sweden. 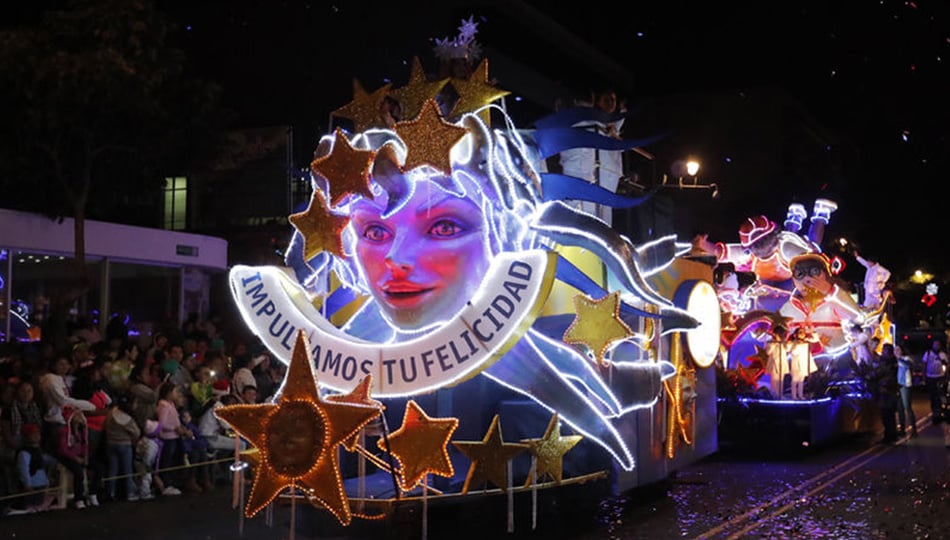 Costa Ricans hit the beach in December and celebrate Christmas with exuberance. Bright lights and festive music fill the air as the country becomes even more vibrant. At the center of the celebrations is the traditional nativity scene called “Portals.” Small toys and fruit are commonly laid in front of Portals as a small offering.

Christmas is the time for food and midnight mass known as ‘Misa de Gallo’ (mass of rooster). The main Christmas meal begins shortly after mass, consisting of chicken, pork, traditional desserts, and plenty of eggnog. Shoes are left out by children for Nino Dios (Baby Jesus) to fill with gifts.

Some of the most important celebrations happen after the 25th. One of the highlights of the holiday season occurs on December 26th when horseback parades known as El Tope take place in major cities. The holiday season comes to an end on January 6th when it’s said the three wise men met Baby Jesus. 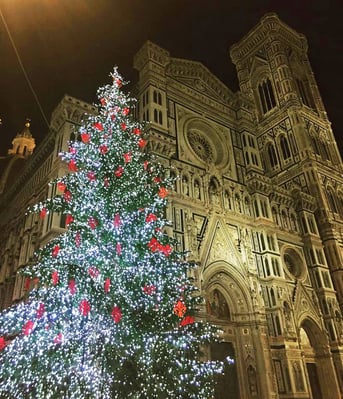 Italy is a country that loves to celebrate its many holidays, and Christmas is no different. Most Italians kickoff the Christmas season on the 8th of December by putting the crib nativity scenes in their home. The naivety scene is a significant tradition, and it is believed that Italians were the first ones to use cribs full of straw in their nativity scenes. Nativity scenes in Italy are elegant, highly detailed, and can be meters high.

On December 24th, meat and sometimes dairy are cut out of most Italians' diets and replaced by a light seafood meal. After midnight mass, its tradition to have a slice of ‘Panettone,’ a fruity sponge cake, and a cup of hot chocolate. Babbo Natale (Father Christmas) brings children small gifts on Christmas Eve, but it isn’t until early January when gifts are exchanged.

On January 6th, the day of Epiphany, an old woman called ‘Befana’ comes to the houses of children. Good children will get stockings full of gifts while black sugar sweets are given to naughty children.

Only a small part of China’s population observes Christmas, and celebrations are reserved for large cities. As one of the world’s most important business centers, the East and West meet in Shanghai and is one of the few places in China that celebrates Christmas to some degree. 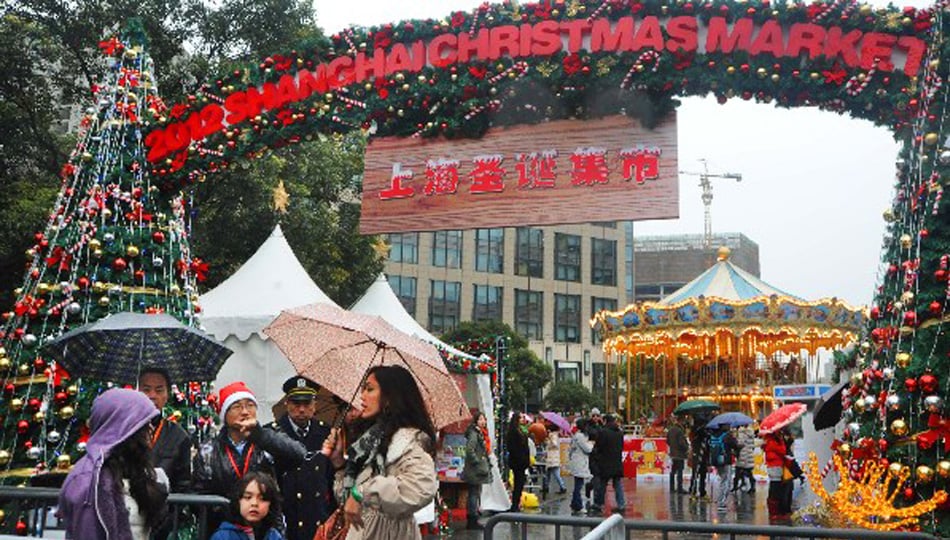 In Shanghai, streets are decorated, and in major department stores you can find Shen Dan Loo Ren the Chinese version of Santa Claus. Even Christmas markets are starting to become more popular in Shanghai, but the holiday is celebrated more like Saint Patrick’s Day or Valentine’s Day. Instead of staying in with family, people go out with friends for lighthearted celebrations. Singing karaoke, seeing a movie, and ice skating are all popular activities. Young couples will exchange small romantic gifts on Christmas.

Food is still an essential part of Christmas even in China. Elegant cellophane-wrapped apples are a common Christmas gift. The tradition started because the Mandarin word for apple, pingguo, sounds similar to the word for Christmas Eve, pinganye.

The bright colored wrapping is holiday themed either printed with a cartoon character of Santa Claus or a traditional Christmas saying.

Christmas isn’t nearly as commercialized in Spain as it is in other Western countries, but the country does have many unique traditions. Lights are hung and trees are put up, but the most important decoration is the nativity scene featuring the Caganer. The Caganer literarily means the “crapper” and is usually a man with his pants down defecating. The tradition may sound crude to some, but it’s meant to symbolize a good harvest and is a focal point of nativity scenes. 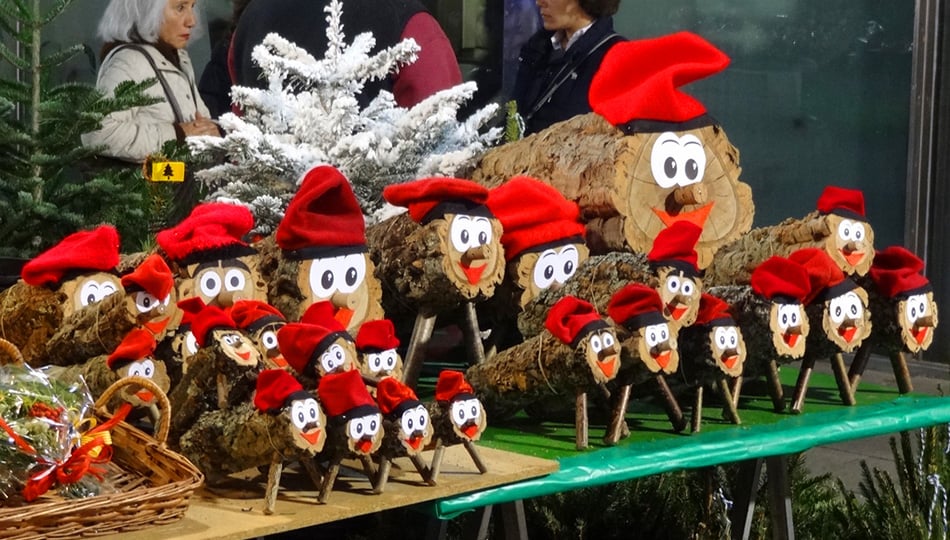 The one Catalan Christmas tradition you won’t find anywhere else is the Tió de Nadal (Christmas log). The log stands on four legs, has a board smiling face painted across one end, and a red sock hat on top. Starting the night of the eighth children feed the log and keep it warm by laying a blanket across it. On Christmas Eve, the log is forced to defecate by being beaten by sticks or forced up against a fire. The Tio drops out small gifts like nuts, candies, and dried figs, that are all meant to be shared.

On Christmas Day, larger gifts are exchanged but not opened, and loved ones gather for a Christmas dinner. December 28th is the Día de Los Santos Inocentes (Day of the Innocent Saints), which is Spain’s equivalent to April Fool’s day. On this day of mischief, people try to get friends to believe in wild stories and play silly jokes. Even Newspapers and TV stations get in on the fun and run their own amusing fake stories. The holiday season officially comes to an end in Spain on January 6th when gifts are finally opened on Epiphany. 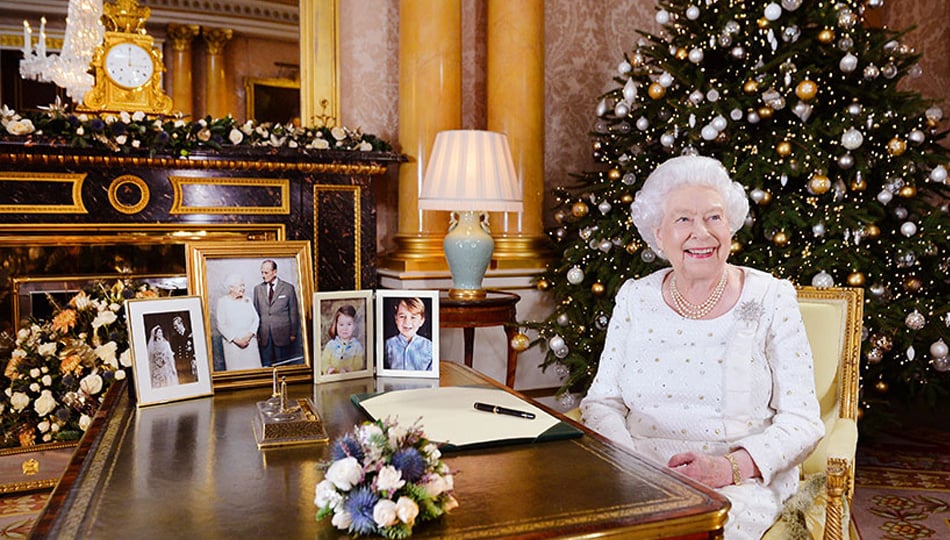 In early November, decorations go up across the UK. Lights being switched on is usually performed by celebrities and broadcast across the country marking the official start to the holiday season. Instead of leaving out cookies and milk on Christmas Eve, children leave out a plate of carrots for reindeer and a mince pie for Father Christmas.

Holiday celebrations continue all the way into early January. Trees come down, and lights are put away on January 5th. It’s generally considered bad luck to have decorations up past the 5th.

Ireland celebrates Christmas in the same way people in the UK and US do, but still have some of their own traditions. Like many other European countries, December 8th is seen as the official start date of the Christmas season and when the celebration can truly begin. Leading up to the 25th, Ireland is full of shopping, holiday cheer, and bright Christmas markets. 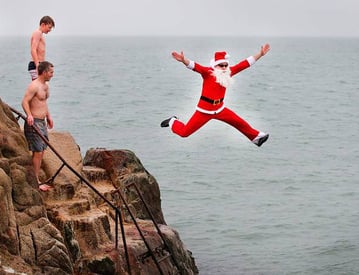 On Christmas, instead of leaving out milk and cookies for Santa, its tradition to leave out meat pie and a glass of Guinness. Dublin celebrates Christmas morning with a swim in the sea. The 40 Foot in Sandycove near Dublin is the area where hundreds of brave swimmers dive into the freezing waters all for the sake of charity.

Holidays celebrations come to an end at the beginning of January on what locals call Little Christmas or Women’s Christmas. Men take over the household duties for the day, while women go out with their friends and family to celebrate. On the same day, the tree is taken down, and the decorations are put back into storage.

Christmas in Paris isn’t about loud parties or large celebrations. Christmas markets can be found all over major cities, and France has some of the biggest markets in all of Europe, but besides that, Christmas is a bit quieter in France. 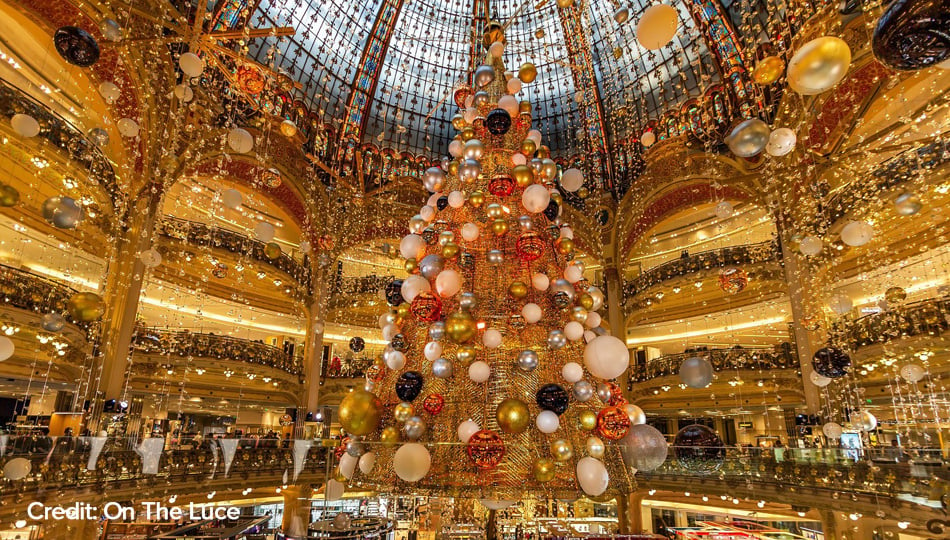 On Christmas Eve, a yule log is carried into homes across France and soaked in red wine to make the log smell good as it burns throughout the night. Candles and fires are kept light and food is left out in the hopes that Mary and the Baby Jesus may stop by. A glass of wine is left out for Père Noël (Father Christmas) who leaves presents under the tree and small gifts inside the shoes of good children.

Father Christmas doesn’t make his trip alone he’s assisted by Le Pere Fouettard, a kind of anti-Santa. There are many different variations of Le Pere Fouettard, but the most common is a man dressed in black robes with a sinister face, unkempt beard, and wild hair. Legend goes as St. Nicholas gives gifts to good children, Le Pere Fouettard beats and gives coals to naughty children.

You won’t find snow and freezing temperature in Australia during Christmas. Instead, you’ll see locals celebrating their summer breaks and hitting the beaches. Santa Claus is even sometimes depicted in warm-weather clothing including an Akubra hat. Classic ornaments like wreaths, lights, and trees are all still common in Australia. 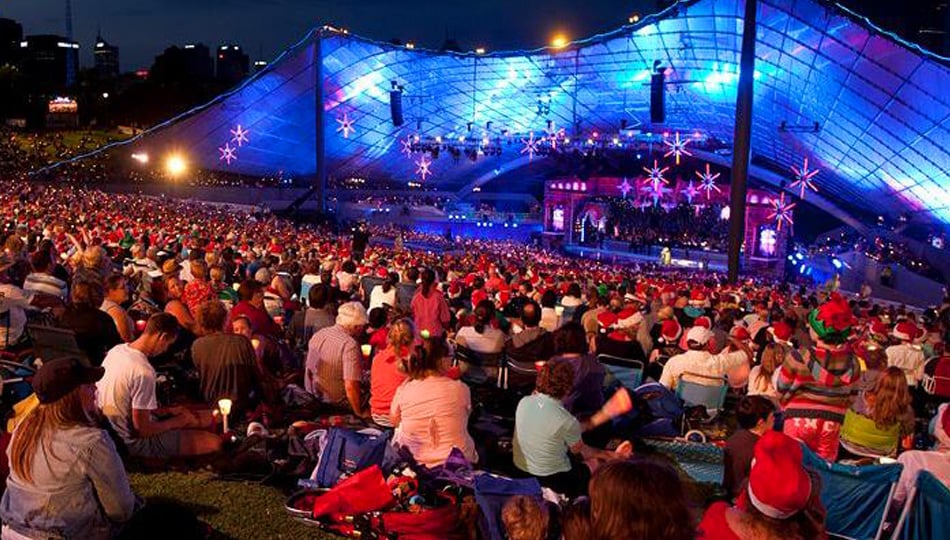 Caroling is an important tradition, but in Australia, caroling isn’t just neighbors going door-to-door it’s a cultural event. Carols by Candlelight started in Melbourne in 1938, and since then has grown into a tradition across the country. On Christmas Eve people gather outdoors to sing Carols by candlelight. The larger events that take place in major cities like Sydney are broadcast on TV across the country.

On Christmas day loved ones and families gather to eat a feast at around noon. Most people have a cold meal or barbecue seafood like lobsters and prawns.

We want to wish all our interns, alum, and their family happy holidays. This holiday season we’re grateful for all the interns who have made this year one of our best years yet, and for our alum for spreading the word about how GE changed their lives.

Make an international internship your Christmas present. You might not be able to wrap it under a tree or fit it in a stocking, but the memories you make will last a lifetime. Setup a call with one of our Admissions Counselors to speak about all our host cities and internship opportunities.

Have a happy holidays and a wonderful new year!