As an intern living abroad, understanding body language cues both in and outside of the workplace is crucial. When practiced correctly, body language such as eye contact, facial expressions, and posture can greatly enhance everyday communication.

However, there are some gestures you’ll want to stay away from depending on where you are in the world! For example, in China, it’s very common to stand close to someone who is speaking, but in the United States, the same proximity might make the speaker feel uncomfortable.

How can you know which types of body language are appropriate for the country and culture you’re in? Keep reading for some helpful body language pointers for some of our top locations. 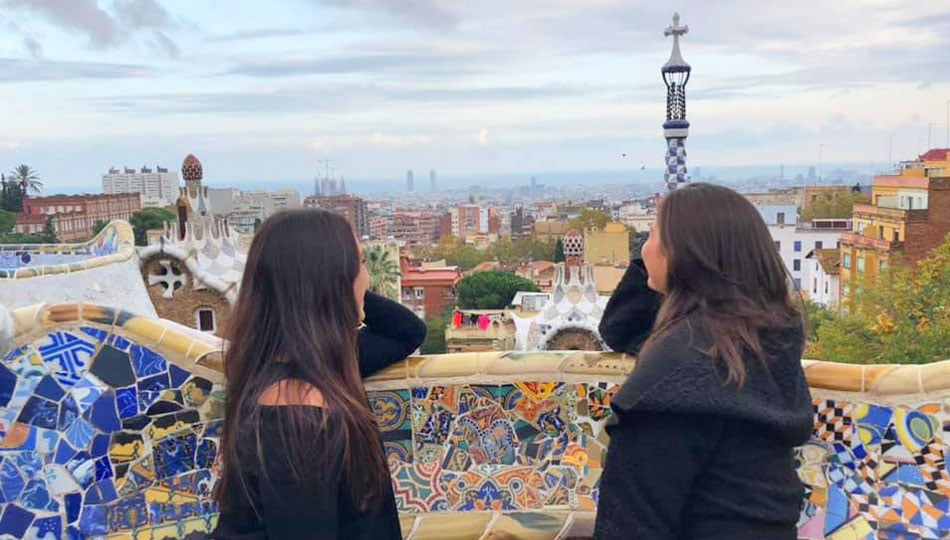 While an almost automatic response for some people, physical contact is very important to consider when communicating with people from other cultures. In the United States, Americans are more open to handshakes and hugs.

Likewise in Spain, physical touching during casual conversations is typically considered normal. You shouldn’t be surprised if a friend or coworker pats you on the arm or shoulder. These are friendly and welcomed gestures in Spain.

A couple of key differences: Spaniards stand closer to each other than we’re used to in the U.S. They also use their hands a lot while speaking, in a very animated way. One thing to be sure you avoid in Spain is yawning in public, which can be considered very offensive!

Italy has a lot in common with Spain when it comes to body language. For example, physical contact is more accepted, and hand gestures abound in conversation. You’ll quickly learn by observation how often hand gestures are used to emphasize and add expression to conversations.

There are a few specific gestures used in Italy that you don’t see in the U.S. One is tapping your nose, which is a signal to “watch out” for something. Also, bunching your fingers together with your palm facing upward signifies confusion. 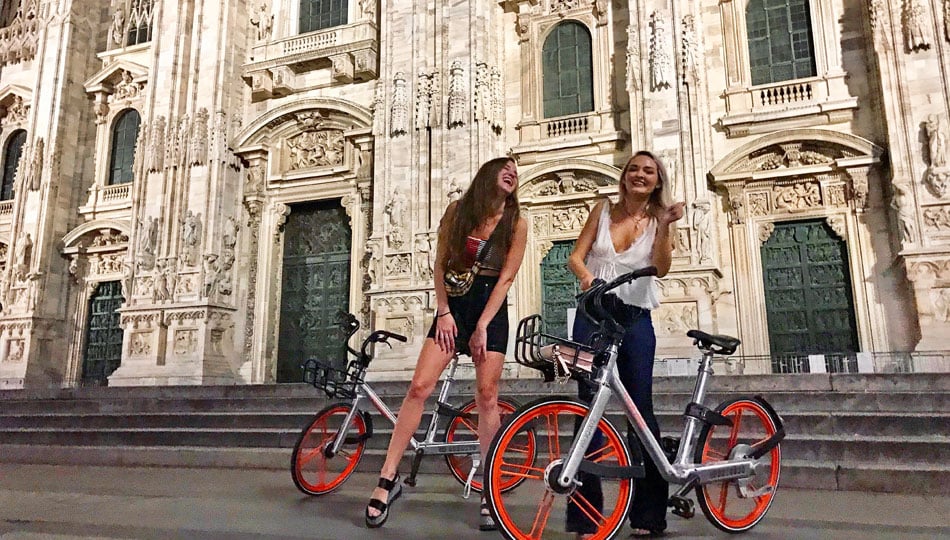 When first meeting someone in Italy, a handshake is expected. But if you’re a woman, be sure to hold your hand out first! Lastly, maintain eye contact while speaking with Italians. If you don’t, it can be interpreted as insincere.

When you arrive at any business or social gathering in Ireland, firm handshakes with eye contact are expected gestures. Be sure to greet everyone present, and even shake hands again before leaving.

If you happen to have a significant other in Ireland, avoid public displays of affection, which are frowned upon. In the same vein, the Irish tend to prefer more personal space amongst themselves. This means you should keep about an arm’s length in between yourself and others.

Fun fact: Rather than pointing a finger in the direction of something or someone, an Irish person will instead nod or motion their head in the same direction.

In England, how firmly you shake hands with someone you meet is a big deal. Shaking hands either too strong or not strong enough can be viewed negatively, so try to aim for somewhere in the middle.

Also, remember that in England shaking hands is only expected when meeting someone for the first time, whereas in the U.S. a casual handshake is a common greeting. When giving a friend or acquaintance a hug in England, keep it short. When Brits hug, their bodies don’t touch at all, and they simply pat one another on the back a couple of times.

Although standing too close to others in England is not acceptable, being publicly affectionate with your significant other has become more and more common. You may be surprised to see so many couples hugging, holding hands, or kissing while in the UK. 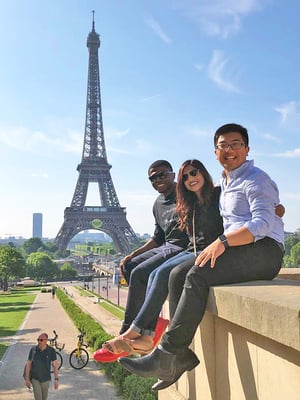 Ironically, hugs are not appropriate in France, yet kisses are! Kisses on the cheek that is. A light “air kiss” on both cheeks is the proper way to greet a friend in France. Keep handshakes light as well, with a single up-and-down movement. (Anything more can come across as domineering).

It’s important to note that the French are a little more strict and controlled when it comes to posture than what you might be used to. If you’re attending a business lunch, you should never sit with your hands in your pockets or on your lap, but keep them resting on the table instead.

Speaking of hands, the “OK” sign in the U.S. (which involves joining the thumb and index finger together to form a ring) actually means “zero” in France. And when you tap the side of your nose with your index finger, it means you’ve just said something smart!

In Costa Rica, less personal space is the norm. You can expect that if you’re waiting in line at the bank, for example, the person behind you will be standing very close to you. Physical contact is also normal in this friendly culture. If an acquaintance pats your shoulder or hugs you as a greeting, don’t be surprised.

And while using a single kiss on the cheek as a greeting is common among friends, it’s not acceptable for the office. Instead, you’ll shake hands both when you meet and greet someone in Costa Rica. Remember that eye contact is also very important in the workplace here.

With over one billion people living in this country, don’t expect to get much personal space while interning in China. You should also be prepared for the stares you might get - yes, stares! When something or someone is out of the ordinary in China, staring is very common.

While in a business meeting in China, it’s very important to keep both feet firmly planted on the ground, whether you’re sitting or standing. You should also use both hands when giving or receiving an item.

Body language in China is very different than what you may be used to in the United States. There are many important gestures to consider, for example, public displays of affection, whistling, and winking are all frowned upon here.

Shaking hands with everyone present, both when you enter and leave business meetings, is a common greeting in Sweden. Outside of this, Swedes are more reserved when it comes to physical contact. They don’t often touch one another in public, so you should avoid any unnecessary contact. The Swedish also allow about an arm’s length of personal space during conversations - even among family and friends! Lastly, constant eye contact is seen as a sign of respect in Sweden’s business settings. 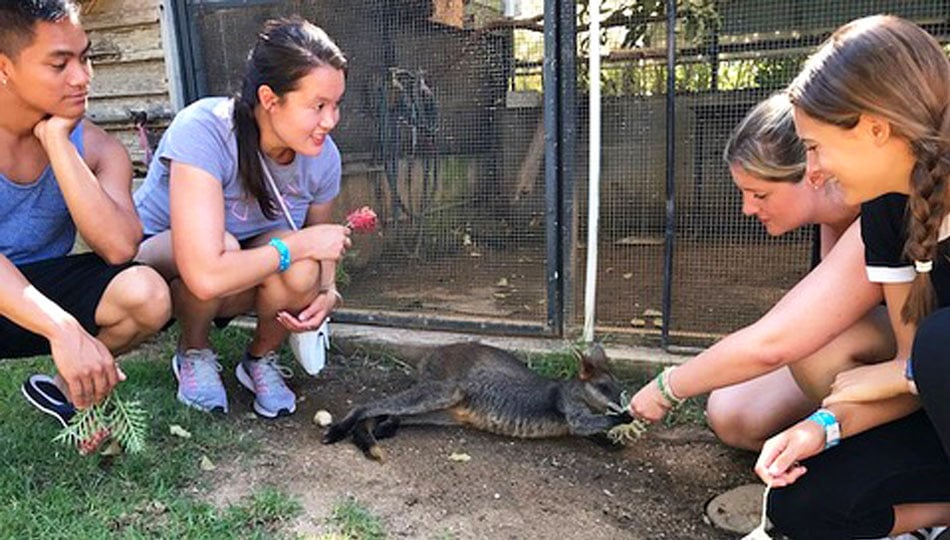 Especially in business settings, eye contact is important in Australia. It’s a sign that the speaker is trustworthy and approachable, and you should make an effort to make eye contact with everyone in the room while presenting or speaking to a group. Australians, like the British, value their personal space. As far as hand gestures go, don’t point at anyone or give a “thumbs up” in Australia, both of which are offensive.

Can’t get enough facts about body language? Check out our friends at TakeLessons for more cultural nuances from around the world.