9 Reasons to Consider a Dublin Internship 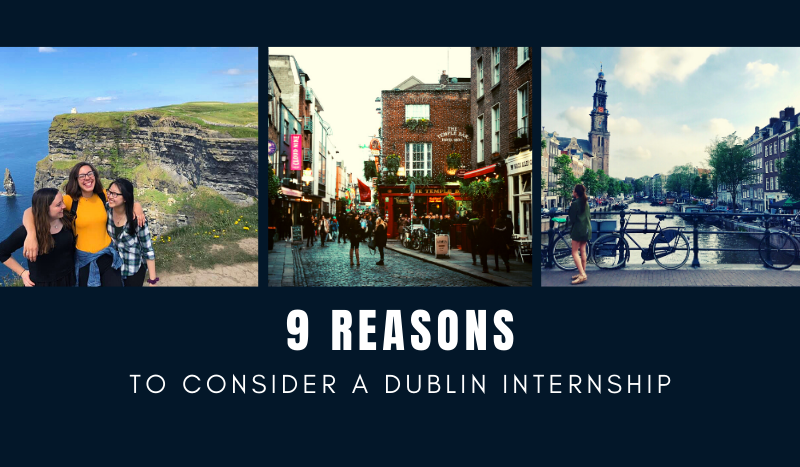 When my colleagues asked me to write a blog about the top reasons to intern in Dublin, Ireland, I was flabbergasted. Did people need a reason to want to go to Dublin?
I've been obsessed with the Emerald Isle since I was a child, and in 2010 I was able to do an internship in Dublin through Global Experiences that helped me accomplish my dream of living there (and the work experience on resume wasn't too shabby either).
Imagine the wind whipping around you as you stand on top of the Cliffs of Moher, or picture yourself in a cozy pub surrounded by new friends with a perfectly poured pint of Guinness in hand.
Ireland needs no selling; she’s perfect. But for those who need a little convincing, below are the top nine reasons to intern in Dublin this year:

Tracing back over 1,000 years, Ireland has a rich and oftentimes dark history. It is visible in every street from the architecture of the pubs to statues on street corners and parks.

On weekends, you can travel outside the city to see the ancient fairy mounds, or raths, around the country hillsides. For a bit of the darker past, take a Black Taxi ride through the streets of Belfast in Northern Island for an artistic glimpse into the struggles of the past decades scrawled out in graffiti on peace walls.

Through many of the museums in Dublin like the National Museum of Ireland, National Writers Museum, and Dublina you can learn about the vikings, revolutions, and enchanting stories of folklore.

James Joyce once said, “When I die, Dublin will be written on my heart.” Dublin is the birthplace of James Joyce, George Bernard Shaw, Oscar Wilde, Samuel Beckett, and many other authors, poets, and playwrights.

If you’re a lover of the classics, or even the more modern authors like Colum McCann, Dublin offers an array of ways to dive deeper into Irish literature. You can walk the streets that inspired the Dubliners or see the home of Wilde near Trinity College.

No matter where you go, the passion of Dublin that inspired so many will be sure to flow through your veins and be imprinted on your heart as well.

Ireland is a small country, but it holds some amazing views. The Cliffs of Moher, Giant’s Causeway, and the Ring of Kerry are just a few of the remarkable places you can see on the island.

One weekend we took a trip to Killarney, and on Saturday we rented bikes and rode through the Killarney National Park. It was gorgeous and budget friendly. In the park we saw waterfalls, the Ross Castle, mountains and rivers.

From the sprawling farmlands of Cork to jagged coastlines of the Aran Islands, Ireland’s landscape will leave you mesmerized.

When you think of Ireland, you think of the classic Irish songs like Whiskey in the Jar and Molly Malone. Ireland is one of the few countries that has its own genre of music that is popular worldwide. The traditional Irish pub songs are still played around Dublin, and the tell-tale sound of the uilleann pipes can be heard at live band performances.

Of course, many musicians have called Ireland home like U2, The Pogues, Van Morrison, and B*Witched (Yeah, I said it. I grew up in the 90s and I loved them).  Ireland is also where I’ve fallen in love with modern bands like Two Door Cinema Club, Bell X1, and Breesie.

There are really excellent places in Dublin to see live bands (big and small) as well as unique record and music stores throughout the city.

This entirely made up and awesome holiday was created in 2009 by Guinness to celebrate Arthur Guinness. Over the past few years international and Irish artists like Ellie Goulding, Example, and Snow Patrol played intimate shows in celebration of the founder of the Guinness brew.

The exact date isn’t set yet, but this event will most likely take place in September. The line up of artists is usually announced in August so keep an eye out.  In September, raise a pint and celebrate like a native to one of Ireland’s most famed names in beer!

Though the RMS Titanic sank over 100 years ago, it’s still a topic of interest and obsession for some. The ship was built in the Belfast Harbour over a span of 26 months starting in 1909.

That area is now called the Titanic Quarter and is home to the largest Titanic museum in the world that opened in Spring 2012. For more information, visit  the Belfast Titanic museum website.

The Irish speak with a soothing and lithe cadence that is unlike any other accent in the world. Their speech is enhanced with words like grand, craic, lovely, and brilliant. Dubliners do not say ‘Thanks’ but instead mutter a ‘thanks a million’ that sounds like ‘tanks a million.’  It’s beautiful and thrilling to hear all the time.

All Global Experiences internships are going to be filled with responsibility and opportunity for professional growth. Now that I’ve seen both sides of the program, I know that the GE team takes great pride in the quality of their internships.

Dublin interns get to be in the unique environment of the Irish workplace for 8 or 12 weeks. The work culture is relaxed and friendly, but with the right amount of seriousness.

One of our past Dublin interns, Mason, describes it best in a video stating, "it’s amazing how connected and how close I feel to these people I've been working with in just a week’s time”.

I was lost in Dublin A LOT. However, it seemed there was always a native there to assist me without asking.

The Irish are by far some of the friendliest people I've ever had the pleasure of meeting (and I’m from the South where kindness and hospitality is our motto). Everyone there seemed willing to help out with directions, start up a conversation, or offer a suggestion on places to go.

I can understand why people take great pride in being Irish. They are, in general, a kind and humorous people.

If the stunning landscapes, enriching history, or fun nightlife don’t convince you to go to Ireland, then the people will.