You Know You're (Becoming) Parisian When...

This is a guest blog from Emily Smith. Emily is a student from Salisbury University, currently interning abroad through her school and Global Experiences. Here, she shares some of her thoughts on what has been like to become a local in Paris.

…you have a strong love/hate relationship with the metro. Seriously it’s the best and worst thing about the city. Public transportation in Paris is wonderful, and the metro is by far my favorite. It’s so convenient when you’re trying to go somewhere because you’re never too far from a metro stop. It’s faster than walking, and when it’s cold and rainy, it’s nice to be somewhat warm and dry. You can get almost anywhere in the city on the metro. And when you go out at night, you don’t have to worry about driving. It’s great.

But then there’s the days when you hate it, like when getting to school takes you over an hour instead of 25 minutes because there was a passenger incident, and traffic on line 13 (mine) is interrupted between Porte de St. Ouen (right before me) and Saint-Lazare (where I transferred to get to school). Or the mornings when all you’re trying to do is get to school on time, and you wait for three trains to go through the station before you can squeeze yourself onto one. Or the nights when the metro stops running at 2am and doesn’t start again until 5:30 and you just want to go home, but unfortunately you just missed the last train out. 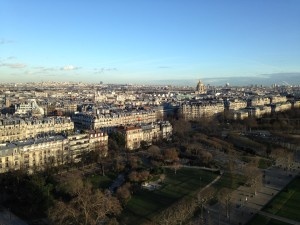 …you finally understand what people mean when they say “Paris is not France.” Yesterday we went on a day trip to Reims in the champagne region. It was about 45 minutes on the high speed train, but would normally be about a 2 hour drive. It’s nothing like Paris which was cool. Having lived in Paris for a month, the differences were easy to pick out. We walked the entire city of Reims in a day. If you walked for an entire day in Paris, you could maybe see an arrondissement. People there were just nicer. Not that people in Paris aren’t friendly, but people in Reims smile at you when you walk past them on the street, and when you cross the street, you don’t risk getting run over by angry, stressed Parisian drivers.

That being said, I’m definitely a city girl. Reims was pretty and the champagne was delicious, but there weren’t enough people or enough places to go to keep me interested for more than a day. Paris is in France, yes, but Paris is not France. 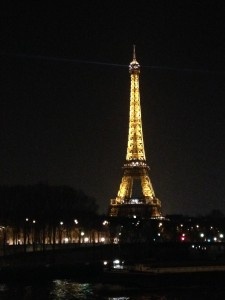 …you know that a meal isn’t really complete without bread, cheese, AND wine. Not just one, or two, but all three. Even lunch. Especially dinner. Sometimes that’s a meal. It really doesn’t matter. You can go to a restaurant at 3 in the afternoon, order a cheese plate and a glass of wine, and call it a day. Expect six different kinds of cheese, four of which are completely foreign (and completely delicious). You eat your cheese ON the bread. There are different ways to cut different kinds of cheese (it’s a learning process, this cheese stuff). But really, this is probably the best pairing of food and drink ever. The French know food.

…you know the best way to judge the overall cost of a restaurant is by how much they charge for a cafe expresso. If you’re paying more than 3 euros for a cafe, you’re paying too much.

…you know the best people watching happens on the metro. You never know what you’ll see. One day, there’s a man walking around with a kitten on his shoulder. The next day, there’s a man playing the guitar while his son sings along…all on the train.

…the thought of ever having to leave this beautiful, hectic, scary, wonderful city is terrifying.