Global Experiences intern Brian Hess is a rising senior at Virginia Tech. He shares his experience meeting the President of Ireland through his non-profit internship in Dublin this summer!

When I first applied to Global Experiences to do an internship in Dublin, I did what Phil Dunphy recommends about birthdays...

That being said, I did have some expectations:1. Have an Internship 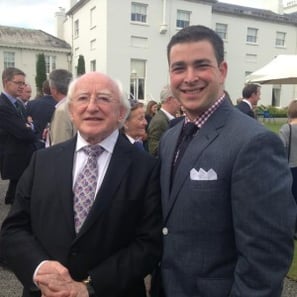 I never would have expected to walk into my office one morning and have an invitation from the President of Ireland to attend his Garden Party.  So the day comes, I head to the party, and have no idea what to expect.  The party was huge.  About 400 people (thats putting it lightly), all working for development NGOs, arrived at his house  for some refreshments, music, and conversation.  I quietly stood behind my supervisor Franzi because everyone knows interns are meant to be seen and not heard.  This party wasn't like any party I've ever been too — you could actually hear people.  After listening to a few local artists ranging in ages from 15-50, and tweeting Barack Obama trying to get an invite to his house, President Higgins gave his speech.  I wouldn't say he’s a dynamic speaker, but there is something about him that forces you to listen.  He flowed between Gaelic and English effortlessly, drawing you in further and further.  After his speech President Higgins mingled with the crowd, and I approached him and asked his guard to take a photo of us together…    So we did.

On my way back, I hailed a cab and the cab driver and I began a friendly conversation.  He asked me: “Is this something you will cherish, or will it fade over time?" I didn't quite know how to respond, I told him that to me, despite it being a unique situation, that this is just another story, albeit the highlight, of a greater experience.  I think it will be one of those things that, when asked about, I can’t tell the story of “When I hugged the President" without telling the story of my entire trip.

**UPDATE** Since his program in Summer 2014, Brian graduated from Virginia Tech and is now the Digital Marketing Coordinator for the National Association of Home Builders, based in Washington DC.