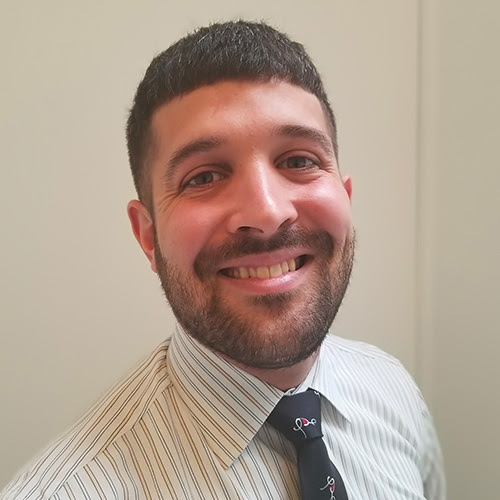 Sarah S. from SUNY - Fredonia knew long before leaving the States how a PR internship in Barcelona would bring out the best of her abilities. “I truly believe that this program can help me gain the skills and connections I need to make my dream come true and I hope to be given the opportunity to do so.” Her dream is to have a positive influence in the world, and in order to do that she knew that it would take hard work that would go beyond an internship.

“Although I have taken public speaking courses, I would love to push myself outside of my comfort zone even further so that I can confidently represent an organization to the best of my capability.”  We can't wait to highlight Sarah’s takeaways from her internship that gave her new professional and cultural perspectives.

Why I Decided to Intern Abroad

Sarah wanted to go beyond North America to experience a new way of life. She describes this change of scenery as, “When you grow up in the States it's easy to forget there's a whole world with different cultures and amazing customs outside of the US bubble. I also really wanted to get real world experience in the field I had spent years studying.”

Her personal decision allowed her to see and understand her own culture differently while growing professionally, but it wasn’t a simple start.

She made the move alone to Spain which drastically expanded her circle of friends to all around the world. She said, “I flew myself across the world where I knew no one and not much about what I was getting myself into and now I have friends from all over Europe and even in Morocco.”

Although these new people became such a big part of her life, she had the opportunity to share these experiences with her friends and family from back home as well. 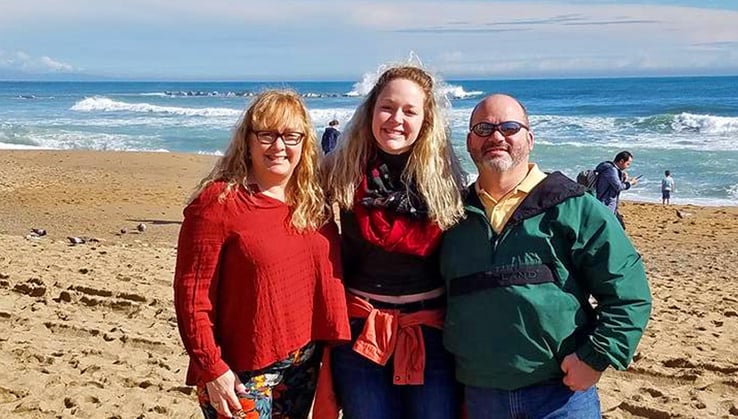 Any of her jitters or nervousness had faded as she gained confidence and a sense of comfort in the Mediterranean beach city. According to her, “My parents and a couple of friends from school visited me during my time abroad, and all they could say was how happy they were to see me somewhere so out of my comfort zone, and yet I seemed as if I belonged there.” Sarah went from feeling like a guest in Barcelona to feeling like a part of the Spanish community. “I truly felt like I found my home away from home in Barcelona.” 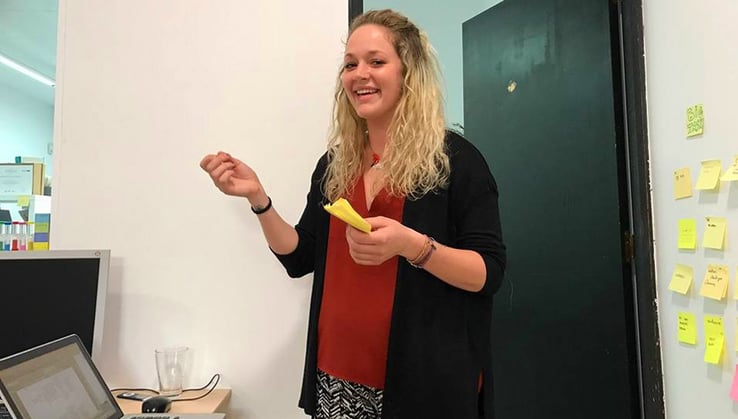 During the internship, she wrote and developed activities to gauge employee happiness and satisfaction on an employee engagement platform as one of her longest, on-going projects. “It was empowering to know that the programs I was writing was being implemented by the Prime Minister's Office in Dubai and the Environmental Agency in Abu Dhabi to make a difference and better the work culture.” Her work directly helped to impact and improve the internal workings of a foreign government agency in another country. Additionally, she took her responsibilities outside of the office to a big conference in Barcelona.

Because the small start-up nature of Social Coin, they had a lot of projects and work ready for her. She felt that she was always challenged to try a variety of tasks on a daily basis. Her biggest accomplishment was when she got to attend Mobile World Congress event, an international convention that happens once a year in Barcelona.

Social Coin launched an app that had been in the works for many weeks leading up to the event. She learned how to pitch to other companies and even investors - which gave her a idea what it’s like to be in the world of the sales and sparked some interest in possibly pursuing it later, along with marketing at some point. She felt like she got to explore different types of tasks that really helped her feel like she could do anything she wants as long as she’s open to learning and putting herself out there - even if it means not being successful at it right away. Check out her snapchat takeover that shows her day at the conference:

Getting Along with Co-Workers

Sarah enjoyed the welcoming presence and openness of her colleagues at the Social Coin. The famous author George Orwell recounted Spanish friendliness stating, “I would sooner be a foreigner in Spain than in most countries. How easy it is to make friends in Spain!”

Sarah too mentioned the social gatherings with her coworkers, such as eating lunch, exchanging stories or even enjoying a beer after work but that wasn’t all. She recounted how her coworkers even brought her salsa dancing, and as she puts it, “Though I wasn't very good, it was a blast.”

The ability to problem solve allowed her to take on new responsibilities and keep moving forward in her role at Social Coin. In her words, “...new surprises were thrown at us constantly and I had to adapt and figure out the best solution.” As if that wasn’t hard enough in one language, it was even more difficult managing content in two languages. She was able to develop translation skills in both Spanish and English that helped her creative writing as well.

This experience as a whole has really given her a lot of perspective on the cultural differences in the workplace between the United States and Europe. Sarah really liked the Spanish workplace environment, which she states was “...productive yet relaxed and focused on team building and communication versus in the US where it is fast pace with a lot of pressure, and focuses less on building work relationships and more on clocking in, doing the work, and clocking out.”

Adapting to the Culture 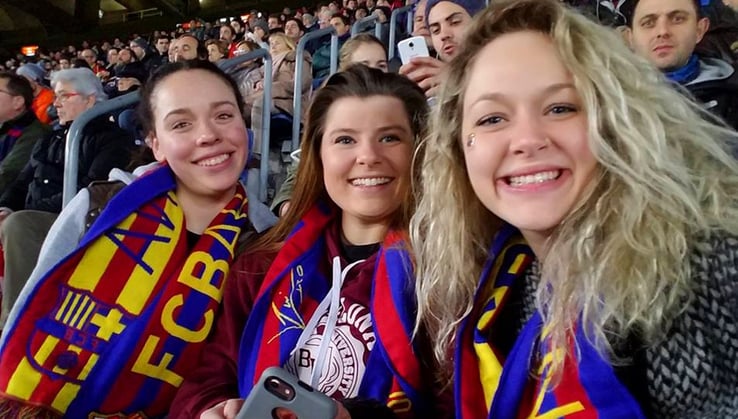 When it comes to adjusting to any culture, one must adjust to the local rhythm and the local language plays a big part of it. In terms of the hurdles of language learning, she mentioned that, “I tried...at work and at restaurants but really struggled to interpret what was said and then formulate a response to have a continuous conversation.“ Although she felt like there was a language barrier, it didn’t stop her from getting to know her fellow colleagues and connecting with them outside of work. 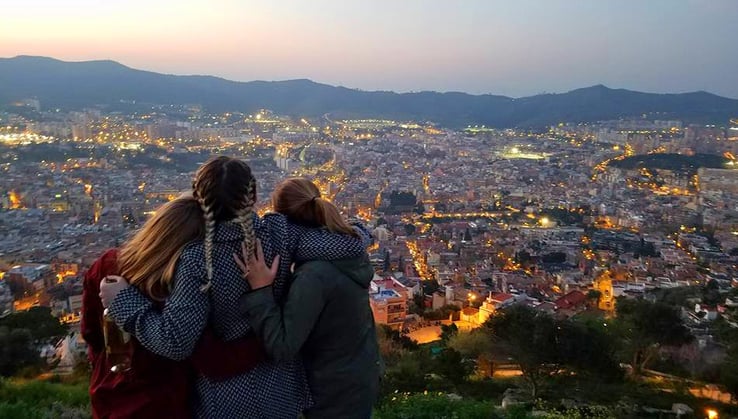 The time spent outside of the workplace was just as valuable as her time spent in the office. She’s created another space to call her own and she won’t forget it. “Because of my experience, I plan on returning to Barcelona, my home away from home, after I graduate to work and continue my adventures in the culture and city I have fallen head over heels in love with.”

Authors Note: I can completely understand as my Spanish professor told me during my time in Spain, “Pero cuidado porque España engancha,” which roughly translated into English meaning, “But be careful because Spain gets you hooked”.

Even for the Spaniards that leave, they get a feeling of “morriña”, which translates to “homesickness” in English, but the word entails more than that for them. For Spaniards, it’s that feeling of missing Spanish food, the weather, the beaches, the tapas, and the people sitting out on patios and benches just people watching.

Her experience in Barcelona made her realize what she enjoys the most in PR and it’s to no surprise that it’s being around good, strong people that motivate her. “I love writing/creating, working with people and small companies and that I can only work to my fullest potential when I am passionate about it and believe in the company's message.”

She became more aware of her own purpose within the workplace and it pushed her to thrive and deliver on big projects which allowed her to get involved in one of the biggest conferences in Barcelona. Not a bad way to network, right? 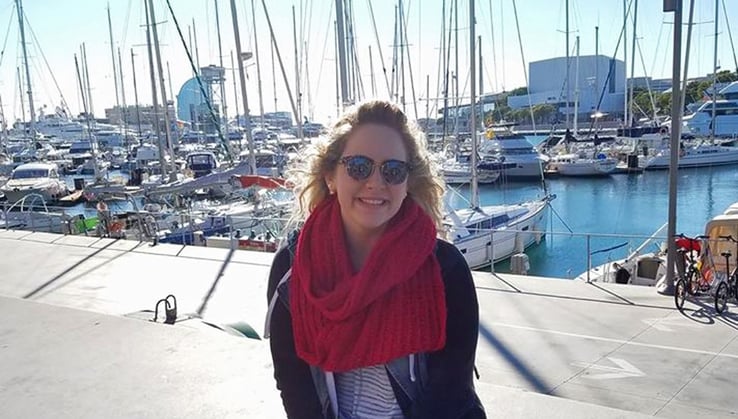 The biggest and best decisions in life come down to the journey of getting to “yes”. We have to go all the way to the edge of any decision and make a choice: Do I jump? Sarah decided to say “yes” and here is her reflection on it:

“You won't know until you make the jump - there are no mistakes, only learning experiences - which is what life is all about. It was the scariest and best decision I have made in my life thus far and encourage everyone - especially people who have nothing to worry about yet (babies, mortgages, bills) - MAKE THE JUMP!”

In PR, and in life, Sarah has shown us that stepping into newer, seemingly intimidating roles help us grow in and out of the office. The range of her skills was tested as she also focused on marketing, social media strategy, and analyst work which she ultimately enjoyed as a part of her experience. According to Sarah, she was “...soaking everything in, taking chances, and trying to be the best version of me...outside of my own culture.” When we are pushed into new terrain that is less known to us, both culturally and professionally, we sense that insecurity and discomfort but it’s the best way to improve ourselves.

She felt refocused toward her ambitions, or as she says, “...I’ll need to lead a life full of new adventures.” We should all hope to feel that same drive toward our dreams.

So if you’re still sitting on the edge of the decision of whether or not intern abroad and you’re still not sure about the next step, I say take Sarah’s advice:

“Go for it. It’s the scariest and best thing that you’ll ever do.”