You Need to Intern in Edinburgh, Scotland – Here’s Why 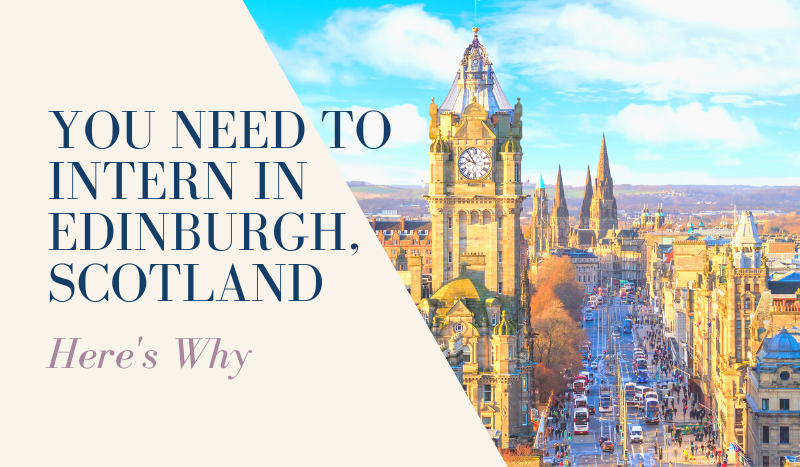 With the world slowly reopening following the COVID-19 pandemic, you—like many others—might be feeling the urge to get out and explore somewhere new. Why not add an international internship to your resume while you’re at it?

There are so many places to see, it can feel overwhelming to choose one. Here’s why you should consider an internship in Edinburgh, Scotland.

With plentiful opportunities to dive into the city’s culture, heritage, and history, enjoy bars and restaurants, shopping, and nightlife, and explore the great outdoors, there’s something for everyone in Edinburgh.

You’re centrally located in Scotland, while also on the doorstep to explore the rest of the United Kingdom and Europe, as well.

Edinburgh is old—which means there is a lot of history behind it. The city of Edinburgh consists of Old Town and New Town.

Originally a walled-in city, Old Town Edinburgh was expanded to include New Town in the 18th and 19th centuries (not as “new” as its name might make you think!) The 2 parts of the city stand in contrast; Old Town has labyrinthine cobbled streets, narrow alleyways, and hidden courtyards, while New Town boasts broad streets in a neat and ordered grid. Both parts have their own historic buildings and monuments that showcase the city’s history, including Edinburgh Castle, the Palace of Holyroodhouse, and the Georgian House, as well was museums like the National Museum of Scotland and the Scottish National Portrait Gallery. The integrity, authenticity, and seamless blending of the Old Town and New Town areas led to Edinburgh’s accreditation as a World Heritage Site by UNESCO in 1995.

Usually lasting nearly the entire month of August, the Edinburgh Fringe is the world’s largest arts festival. Before the pandemic, the festival included more than 3,500 different shows in over 300 venues throughout the city each year. Shows range from theatre, to comedy, to live music performances, to storytelling of local legends and folklore (more on this below!) The festival was cancelled in 2020 but returned on a smaller scale in 2021.

You are likely familiar with Loch Ness and the legend of the Loch Ness Monster in Scotland, but the city of Edinburgh itself has its own robust reputation surrounding myth, lore, and literature, too.

Literature fans will appreciate Edinburgh’s significance across many genres. Prolific writer Sir Arthur Conan Doyle, creator and author of Sherlock Holmes novels and short stories, was born in Edinburgh. Ebenezer Scrooge of Charles Dickens’s A Christmas Carol was created while Dickens wandered the Canongate Kirkyard cemetery in Edinburgh. Much of the Harry Potter universe was based in Scotland, and author JK Rowling wrote most of the books in cafes while living in Edinburgh.

Scotland has quite the bewitching history surrounding witchcraft and witchery. After the Witchcraft Act of 1563, which outlawed witchcraft or consulting with a witch as crimes punishable by death, more people were tried for crimes related to witchcraft in Scotland than any other country in Europe, with Edinburgh being the epicenter for many of these trials. As witchcraft paranoia and hysteria spread across Scotland and the rest of Europe, King James VI (who was convinced himself that he was being tormented by witches due to his constant fear of suffering a violent death) ordered the Great Scottish Witch Hunt, which authorized the persecution and torture of all suspected witches across Scotland. There are many city tours (and nighttime ghost tours) in Edinburgh that retell this side of the country’s history.

The Underworld of Edinburgh

Buried beneath Old Town Edinburgh is the Underworld of Edinburgh, a series of passageways and chambers rich with history of the bubonic plague and haunted ghost stories. On tours you can visit the room of ‘Wee Annie’, a child who haunts the Underworld after succumbing to the plague.

Other popular Scottish legends and folklore are based on the country’s vast and beautiful landscapes (check out Fingal’s Cave, Corryvreackan Whirlpool, or the Ghost Piper of Clanyard Bay) and tales of mythical creatures like the Stoor Worm, selkies, and kelpies. And for those of you looking for something on the lighter side, the national animal of Scotland is the unicorn!

Even though Edinburgh is an old city, there are still tons of options when it comes to food and drink, shopping, and enjoying a modern city life. Like the city itself, there is a mix of old and new, from traditional pubs to trendy lounges, small local boutiques to the new 4-storey shopping center. Even inside the city, you’ll find endless opportunities to get outside and enjoy nature.

On the trendy side, places like Juniper and Copper Blossom offer elegant menus with views of the city.

Princes Street in New Town is Edinburgh’s main shopping street, offering shopping on one side with a great view of the Old Town cityscape on the other. George Street is nearby, offering additional shops, with St. Andrew Square on one end of the street and Charlotte Square on the other. There are many other options to check out while shopping and exploring Edinburgh, including the Multrees Walk for luxury fashion, the Grassmarket for independent shops, and the Stockbridge outdoor market for fresh produce and baked goods.

There is quite a bit of natural beauty to take in across Scotland, but you can also enjoy the outdoors without even leaving the city. Arthurs Seat is a dormant volcano visible from virtually all parts of Edinburgh, with a number of different paths to the top suitable for all ability levels. At the top you will find stunning views of the city and surrounding area. Nearby is the Pentland Hills Regional Park, offering over 100km (60 miles) of trails for hiking and biking, with the opportunity to run into some long-haired Highland Cows along the way. Two walkways, the Water of Leith and Union Canal, connect inside the city and offer additional ways to exercise, sightsee, and escape into nature.

Business etiquette in Scotland is similar to the U.S. in some ways, and very different in others. Though generally friendly and welcoming, Scots tend to prefer low physical contact in professional settings, meaning handshakes are light as opposed to aggressive, and you probably don’t want to hug your boss on the first day of work. Politeness and punctuality are important in the workplace, as well as outside of work. You’ll want to be sure to arrive on time for your engagements and address individuals with their proper Sir/Mr./Mrs. title unless invited to use first names. Though it may vary from place to place depending on the job and employer, dress codes are typically more professional than casual.

Scotland has a strong work-life balance, with regulated work practices and conditions to safeguard employees and boost retention and employment satisfaction rates. Business hours in Scotland are similar to the U.S., with employees averaging 37-40 hours per week. Vacation time, or “annual leave”, is given based on days worked—typically full-time employees receive at least 28 days off annually. Most workplaces also have off 9 public/bank holidays annually. These are not required to be paid but many employers do as an additional perk for their employees.

One additional perk of interning in Scotland is the language—since English is the official language, you won’t really need to worry about a language barrier, allowing the possibility to intern in a variety of fields since there will not be a language proficiency requirement. However, interning in Edinburgh will expose you to the Scottish accent, as well as different dialects and slang terms that vary from place to place. You may even get to learn a little bit of Scots or Scottish Gaelic while you’re there!

A mix of past and present, Edinburgh is rich in history while still offering modern city living and outdoor adventure. If you’re hoping to go somewhere where there is always something new to do, Edinburgh, Scotland should surely be on your radar for an international internship with Global Experiences.

Are you ready? Fill out an application to start planning your internship experience!