How to Meet Locals in Paris (and Around the World!)

If you are like most Global Experiences interns, immersing yourself in a new culture for 10 or 12 weeks is one of the major highlights that attracted you to this program, and you’ve probably already considered that meeting locals is the best way to do it! From my personal experience living in Paris for about a year and a half, I couldn’t agree more. While much of this post is specific to Paris, many of the ideas and resources I share also exist in major cities all over the world, so you can benefit from these suggestions no matter where you’ll be interning abroad! Here are a few things to keep in mind when meeting locals in your new city:

The idea of friendship varies across cultures. When traveling abroad, US Americans are often perceived as extremely friendly, sociable, smiley, and quick to consider someone a friend, even if they’ve only known them for a few hours. In France, however, solid relationships are very important and friendships are often built over a long period of time. Social circles can be smaller than in the US, and the title of “friend” (as opposed to acquaintance, classmate or colleague) might not be thrown around so loosely. For this reason, it may be hard for a French person to envision becoming friends with someone who will be living in their city for just a few weeks. That being said, Paris is a very international student city attracting young people from all over France and the rest of the world, so there is no shortage of interesting people looking to meet others! 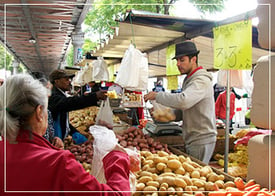 Who is a local? To follow up on my first point, it can be helpful to reconsider your definition of who is a local. A born and raised Parisian is actually A LOT harder to come by than you might think, and a huge percentage of the city’s population has moved here from another region of France or the world to take advantage of all the fabulous educational, professional, and cultural opportunities the city offers. A local is really anyone who currently calls the city their home, and is someone who will have plenty of insight to offer, whether they’ve been here for the past two or twenty years!

Now that you’ve considered what friendship means across cultures as well as the many faces of a local, how do you meet them? Here are a few things that have worked for me and my friends:

Language barrier, or bonus? While you may have been studying French for years, it’s normal to be apprehensive about meeting new people and expressing yourself in a second (or third, fourth, etc.) language. You might think that it will be harder to make friends due to the language barrier. In my experience living in Paris, however, speaking a different language is a bonus, not a barrier! Many young people are interested in learning English (and other languages) for both personal and professional reasons, and language exchanges are one of the best ways to do this. During your Global Experiences program, we’ll check out Franglish, a language exchange for native French and English speakers taking place several times per week at various bars around the city, but you don’t have to stop there! Here’s what one of my friends says about Conversation Exchange: “[It] has been the best for me. You get a chance to meet people one on one to practice your language skills and often you'll meet people who are eager to show you around Paris.” Another friend recommends Polyglot Club, a resource she used when she first arrived as a student in France 8 years ago which introduced her to several people with whom she is still close friends today (including her boyfriend!). 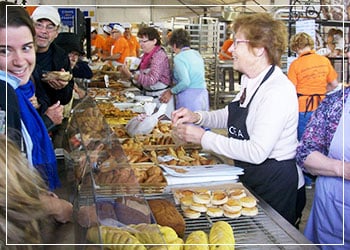 Develop a current interest, or explore a new one! Many of my friends who have had the most success establishing a vibrant social network in Paris have done it through a hobby. Even if you’re totally different when it comes to your nationality, age, gender, etc., you’re bound to have at least one major thing in common with everyone at these gatherings! A friend who is an avid runner has used both Facebook groups and Meetup to find locals to train with. Whether you’re into coffee, yoga, knitting, Frisbee, or playing the ukulele, chances are you can find a whole group of people on Meetup who do too! If you’re stumped on how to pursue your hobby or interest abroad, ask your Location Coordinator; chances are he or she can point you in the right direction or connect you with someone!

The art of great French bread is a whole world to discover and explore. What better way than to learn from locals at Paris’ annual bread festival?

International student networks. You are about to move to a major world city, which naturally means that plenty of other people your age have also recently arrived to begin studying, interning, volunteering or working here too! International student groups are a great way to meet people, and a popular one in Paris is Le Club International des Jeunes à Paris (CIJP) which organizes excursions, workshops, museum visits, linguistic exchanges, parties, and more.

In closing, the best advice I can give is to be open-minded, put yourself out there, and try new things when meeting locals during your internship abroad. It’s the best way to learn new things about yourself, others, and the world!